YIMBYtown will host scheduled programming with mainstage events and breakout rooms throughout Monday April 11 and Tuesday April 12. Programming on Wednesday April 13 will include YIMBYtown’s “Unconference” in the morning, additional programming Wednesday afternoon and the opportunity to participate in “field trips” to visit specific neighborhoods in the Portland region. There will be programming on Monday evening and a concluding keynote presentation on Wednesday evening. We will be uploading times for specific panels as they are finalized – check out the schedule page of the website for more information.

All three venues are ADA-compliant and include gender-neutral bathrooms. 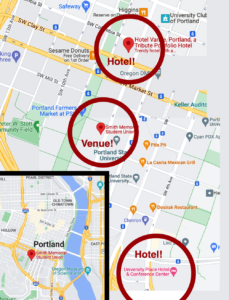 YIMBYtown has coordinated room blocks in two separate hotels each within walking distance of the conference and near Portland’s transit mall.

Rooms at The Vance cost $129 a night; click here to reserve your room.

Getting to and around Portland:

Portland, Oregon is located on three Amtrak lines: the Cascades route through the Pacific Northwest, the Coastal Starlight across the entire West Coast, and the Empire Builder, which connects Portland to Montana, Minneapolis and Chicago.

TriMet tickets are available for purchase at any light rail stop; a $5 pass covers all bus, light rail and streetcar travel for a day.